Half a million Indians flee floods in northeast brought by rain

Half a million Indians flee floods in northeast brought by rain

More than five people have fled their homes to escape the torrential floods triggered by pre-monsoon rains in India’s northeastern state of Assam, officials said on Wednesday, as they warned the situation could worsen.
One of the world’s largest rivers, the Brahmaputra River, which flows from Tibet into neighboring India and Bangladesh, has breached its banks in Assam in the past three days, submerging more than 1,500 villages. 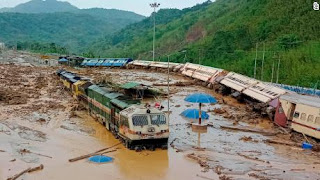 Heavy rains lashed most of the rugged state and continued to rain on Wednesday, with more expected in the next two days.
“More than 500,000 people have been affected and the flood situation is getting worse every hour,” Assam’s Water Resources Minister Piyush Hazarika told Reuters. He said that seven people have died in different accidents in the last three days.
According to state Health Minister Kishab Mahanta, Indian Army personnel have rescued more than 2,000 stranded people in Hogai district.
National officials said the water level in the Brahmaputra river is expected to rise further.
Assam Revenue Minister Jojen Mohan said, “Floods and landslides have cut off railways and roads, but the situation in the worst-hit Dima Hasau remains grim.”
Meanwhile, other cities in India, especially the capital New Delhi, are witnessing a heat wave that has engulfed much of South Asia.
Rising temperatures in parts of Pakistan and India in recent weeks have closed schools, damaged crops, disrupted energy supplies and kept residents indoors. It also prompted experts to question whether this temperature is suitable for human existence.
Jacobabad, one of the world’s hottest cities in Pakistan’s Sindh province, recorded 51 degrees Celsius (123.8 Fahrenheit) last Sunday and 50 degrees Celsius (122 Fahrenheit) the day before. Delhi’s temperature in India exceeded 49 degrees Celsius (120 Fahrenheit) on Sunday.
Share
Facebook
Twitter
Pinterest
WhatsApp