Skip to content
Patna Pirates defeated Bengaluru Bulls 38-31 in the 59th match of the eighth season of Pro Kabaddi League held at Sheraton Grande Whitefield, Bengaluru on Sunday.  With this win, Patna Pirates has reached number one in the points table.  In this match, the defense of both the teams performed well and Sunil of Patna Pirates scored 9 tackle points and became the highest tackle points scorer this season.  Neeraj Kumar and Mahadharma also made three interventions.  Mahendra Singh and Saurabh Nandal also completed the top 5 Bengaluru Bulls.  Pawan Sehrawat also managed to complete the Super 10 in this match but failed to win the team. 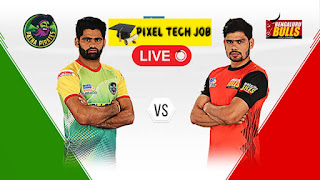 Patna Pirates won the bowl and were the first to invite Bangalore Bulls for a raid from Pawan Sehwat. Pawan gave the Bulls a 6-2 lead with three straight raid cars. At the same time, Sachin Tanwar of Patna was also doing successful raids. Sajin Chandrashekhar managed to stop the storm for some time by holding on to Pawan’s thigh. Sunil Chandran meets Ranjith and Bharat and removes the top three pirates from the carpet. Mohammad Drizza confronts Deepak Narwal and drives away the bulls. Sachin Tavnar beat the Pirates 15-11 on two contact points. Pawan completes the magic of Super 10 by firing Sazen. After the dismissal of Pawan, Patna’s defense again dismissed Chandran Ranjit and Bharat. By the end of the first half, Patna Pirates were leading 20-16.